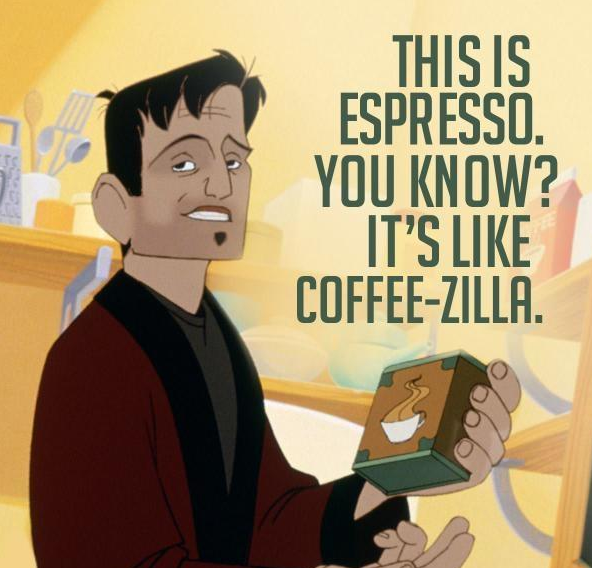 The Real Truth Behind Coffeezilla

If you’ve ever been on YouTube, as I’m sure anyone of you has, there’s one man that you might find telling you to “Pay no mind to that man behind the curtain!” (yes, the Wizard of Oz reference was necessary).

His name is Coffeezilla, and he’s a viral sensation on the YouTube Creator’s list by pointing out fake gurus, fake online courses, and online Ponzi schemes (and much more).

Unfortunately, if you’re a successful marketer, you may realize that by pointing out these people, he’s only putting them down, and it’s really just downright hurtful.

Not every online course is a scam and not every webinar is invalid.

Plus, there are a lot of truly good people offering a service out there (like myself) who aim to help people by saving them time, money (by improving a truly positive return on investment), and so much more!

So let’s get behind this Coffeezilla and see just why he’s just as bad as the “fake gurus” he’s claiming to point out!

Please note that even though he points out fakes that there are real online courses that work, that are worth every penny.

The key is knowing the bs or seeing the red flags…..they are easy to spot.

But thanks for the attention…ha

Are There Scammers Out There?

Of course, there are some big “guru” names out there in terms of being successful on other people’s dime.

Coffeezilla himself makes a bad name for people who are successful just because every person who purchases their programs aren’t successful.

The true scammers and fake gurus are the ones who don’t offer any type of support out there.

You can’t judge your lack of success on someone who’s providing quality training for others.

Not only that, but many of the problems that customers of these programs face (when it comes to lack of success) is simply because they don’t put everything into their programs. When you’re wanting to be self-employed, and wanting to be a true marketer, copywriter, web designer, or any other online entrepreneur, it will remain a side gig making minimal income unless you treat it as a true business.

Interesting enough, it appears that old coffee is promoting affiliate links under his YouTube channel so it appears like he is just trying to get attention to make money himself 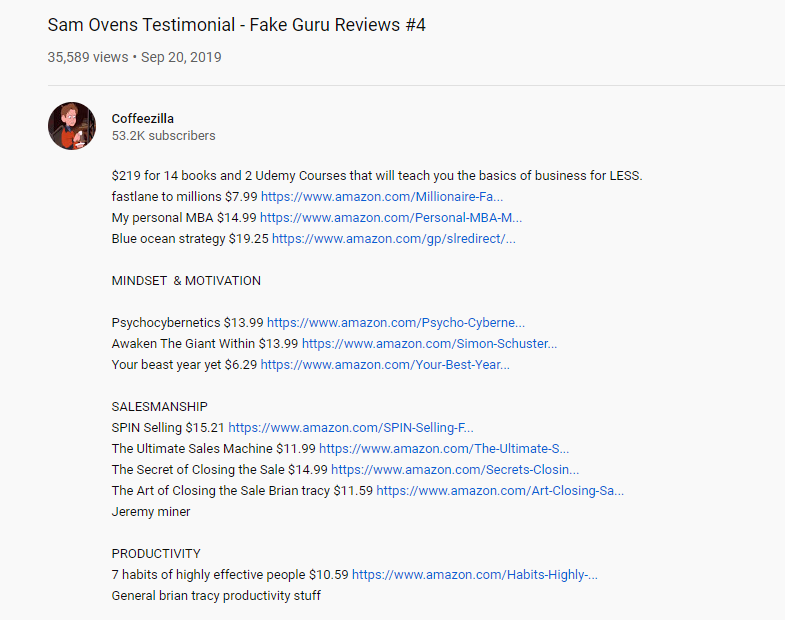 And every person who Mr. Zilla points out on this actually DOES tell people this important fact.

Get rich quick schemes are the ones you need to watch out for. Similar to the whole bitcoin thing with the infamous Crypto Nick and other “ponzi schemes” that existed just a couple years ago. They were the ones making claims that if you signed up for their affiliate links and followed their footsteps in cryptocurrency trading and investments, you could be a millionaire in as little as a month…

Truth is, not without investing a metric ton of your time and money into it can you truly succeed that quickly.

The real goal is that Mr. Coffee wasn’t successful doing his own guides, and he’s taking it out on other people.

He didn’t obviously put in the efforts that he should have, and while he’s shaming all of these other people, he himself has been successful doing one thing – putting down other people.

The downside to this?

No, I’m not putting him down completely; there are some helpful things that can be found on his YouTube channel.

However, the majority of his videos are about finding “fake gurus” and in turn, he’s not putting down just the gurus, but the entire online education system.

He even puts down copywriter webinars that truly do help to make those without any inkling of copywriting more successful than they were before they attend.

If you’ve ever gone to Udemy or Upwork, you’ll see that there really are a lot of successful people who attend seminars, marketing, and other seminars, and in order to achieve these, you normally won’t be selected if you’re a free user.

And some of the same teachers on Udemy have a much deeper education platform outside of Udemy, for many reasons.

One of them would be because of video quality, the next is how Udemy treats their course creators.

Just so you are aware, you can watch YoutUbe video after YouTube video to learn things but you can not create a successful online marketing business without investing in yourself.

After all, do you think this website is free?

Do you think that getting this page ranked in Google is by accident?

It all costs money, nothing in fact is free, with that being said, be willing to invest in yourself if you are serious about chasing an online dream….seriously!

Most of the acclaimed fake gurus who were successful do have one thing that Coffeezilla himself also doesn’t have.

And that’s a real Q&A system.

He just puts videos out there which are one-sided.

Sure, he interviews people and involves a couple of other successful marketers in his personal circle to help go against the likes of Kevin David and John Crestani, but other than that, nobody’s heard of these people.

After all, think of it this way, if you were to make a lot of money from the internet then you wanted to share your knowledge to help others if someone started putting you down for it then how would you feel?

Would you go on his YouTube channel just to clear your name?

Would you waste your time?

Or would you ignore it?

I think the answer is clear.

And he doesn’t answer or educate people himself by answering questions.

Along with that, many of the fake gurus that he tries to put down DO truly have a net worth that ranges anywhere from hundreds of thousands annually to over a million dollars.

His own net worth? $69,000 – and it’s all from his YouTube channel due to monetization and views.

He makes a comfortable living from his rants, and he doesn’t tell people this or tell you how he does it.

He also doesn’t tell you how he is getting in trouble numerous times from slandering successful people in order to achieve his own fame and mediocre success. And then he gets mad when a person he puts down retaliates?

How to Spot a Real Online Education System</stro